Specially introduced screening of The Lobster, a 2015 absurdist dystopian black comedy, co-written, co-produced, and directed by Yorgos Lanthimos. In the film’s setting, single people are given 45 days to find a romantic partner or otherwise be turned into animals.

This week’s programming is generously brought to you by Jennifer & Bryan Murphy.

Specially introduced screening of Phase IV, a 1974 science-fiction horror film. The only feature-length film directed by graphic designer and filmmaker Saul Bass, it stars Michael Murphy, Nigel Davenport and Lynne Frederick. After a spectacular but mysterious cosmic event, ants undergo rapid evolution and develop a cross-species hive mind and build strange towers and geometrically perfect designs in the desert. Except for one family, the local human population flees the strangely acting ants. Scientists James Lesko and Ernest Hubbs set up a computerized lab in a sealed dome located in an area of significant ant activity in Arizona. The ant colony and the scientific team fight each other, though the ants are the more effective aggressors.

Specially introduced screening of Primer, a 2004 American science fiction film about the accidental discovery of time travel. The film was written, directed, produced, edited and scored by Shane Carruth, who also stars with David Sullivan.

Specially introduced screening of Silent Running (1972), an environmental-themed post-apocalyptic science fiction film set in a future where all plant life on Earth is becoming extinct.

Specially introduced screening of Moebius, a 1996 Argentine science fiction film directed by Gustavo Mosquera and starring Guillermo Angelelli, Roberto Carnaghi and Annabella Levy. It is based on the classic short story A Subway Named Mobius, by Armin Joseph Deutsch. The film is set in a dark and dystopian Buenos Aires, where a 30-passenger convoy vanishes in the closed circuit of the underground system. Research will be initiated towards finding the cause of this dematerialization. A young topologist (surfaces mathematician) leads the investigation based on some lost maps and technical data sheets. He cannot find the whereabouts of the old scientist who designed the intricate weft of the subway web, until the unexpected aid from a young girl will ease the obtention of the first clues.

Truth or Consequences is a speculative documentary about time and how we weave the past into the present and our possible future. Set in the small desert town of Truth or Consequences, New Mexico, the film takes place in the shadow of the world’s first commercial Spaceport. Subtly set in a near future when space travel has begun, the film follows five residents in the town. Combining documentary cinema, archival footage, experimental virtual reality images and an improvised score by Bill Frisell, Truth or Consequences is a lyrical meditation on progress, history, and how we navigate a sense of loss within ourselves and within a changing world. More at www.torcfilm.com.

Specially introduced screening of Ikarie XB-1 (released in the United States as Voyage to the End of the Universe), a 1963 Czechoslovak science fiction film directed by Jindřich Polák. It is based loosely on the novel The Magellanic Cloud, by Stanisław Lem.

Screening of Colossus: The Forbin Project (a.k.a. The Forbin Project), specially introduced by Santa Fe Institute President David Krakauer. The Forbin Project is a 1970 American science fiction thriller film about an advanced American defense system, named Colossus, becoming sentient. After being handed full control, Colossus’ draconian logic expands on its original nuclear defense directives to assume total control of the world and end all warfare for the good of mankind despite its creators’ orders to stop.

For a deeper dive into this story, check out the series of books it is based on

Free screening of Apollo 11, a 2019 American documentary film edited, produced, and directed by Todd Douglas Miller. It focuses on the 1969 Apollo 11 mission, the first spaceflight to land humans on the Moon. The film consists solely of archival footage, including 70 mm film that was previously unreleased to the public, and does not feature narration or interviews.
This screening will immediately follow a presentation by Nicholas de Monchaux on the Making of the Moonsuit.

In the wake of Google’s AI Go victory, filmmaker Oscar Sharp turned to his technologist collaborator Ross Goodwin to build a machine that could write screenplays. They created “Jetson” and fueled him with hundreds of sci-fi TV and movie scripts. Building a team including Thomas Middleditch, star of HBO’s Silicon Valley, they gave themselves 48 hours to shoot and edit whatever Jetson decided to write. Jetson then re-named himself “Benjamin.”

Screening of Powers of Ten (1977), a scientific short film depicting the scale of the Universe (by factors of ten). Written and directed by Charles and Ray Eames. In 1998, Powers of Ten was selected for preservation in the United States National Film Registry by the Library of Congress as being “culturally, historically, or aesthetically significant”.

Free screening of Alien (1979), with special introduction by James S.A. Corey duo Daniel Abraham and Ty Franck. Space is limited (and no one can hear you scream).

Screening of A Trip to the Moon (originally Le Voyage dans la Lune), a 1902 French silent film directed by Georges Méliès. It features an ensemble cast of French theatrical performers, led by Méliès himself in the main role of Professor Barbenfouillis, and is filmed in the overtly theatrical style for which Méliès became famous.
The film was an internationally popular success upon its release, and was extensively pirated by other studios, especially in the United States. Its unusual length, lavish production values, innovative special effects, and emphasis on storytelling were markedly influential on other film-makers and ultimately on the development of narrative film as a whole.

The Santa Fe Institute, along with AMP Concerts and the Santa Fe Railyard Community Corporation kick off the second annual InterPlanetary Festival with a Free, outdoor public screening of 1968’s Planet of the Apes, introduced by Jonathan Rinzler, New York Times best-selling author of the critically acclaimed Making of the Planet of the Apes. 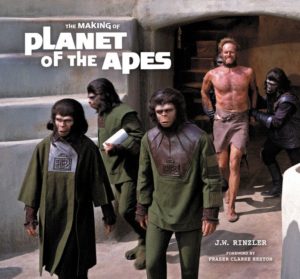 Synopsis: An astronaut crew crash-lands on a planet in the distant future where intelligent talking apes are the dominant species, and humans are the oppressed and enslaved.

In this sequel set eleven years after “The Terminator,” young John Connor (Edward Furlong), the key to civilization’s victory over a future robot uprising, is the target of the shape-shifting T-1000 (Robert Patrick), a Terminator sent from the future to kill him. Another Terminator, the revamped T-800 (Arnold Schwarzenegger), has been sent back to protect the boy. As John and his mother (Linda Hamilton) go on the run with the T-800, the boy forms an unexpected bond with the robot.
This special screening will be introduced by Scott Ross, who at the time was the Vice President and General Manager of Lucasfilm’s Industrial Light and Magic, the company responsible for Terminator 2’s visual effects.

As Adm. James T. Kirk (William Shatner) and Capt. Spock (Leonard Nimoy) monitor trainees at Starfleet Academy, another vessel from the United Federation of Planets is about to try out the planet-creating Genesis Device in a seemingly deserted portion of space. In the process, two of Kirk’s officers are captured by Khan (Ricardo Montalban), an enemy Kirk thought he’d never see again. Once more, Kirk takes the Enterprise’s helm, where he meets Khan’s ship in an intergalactic showdown.
RESERVE YOUR TICKETS NOW!

In the 23rd century, a New York City cabbie, Korben Dallas (Bruce Willis), finds the fate of the world in his hands when Leeloo (Milla Jovovich) falls into his cab. As the embodiment of the fifth element, Leeloo needs to combine with the other four to keep the approaching Great Evil from destroying the world. Together with Father Vito Cornelius (Ian Holm) and zany broadcaster Ruby Rhod (Chris Tucker), Dallas must race against time and the wicked industrialist Zorg (Gary Oldman) to save humanity.
This special screening will be introduced by Scott Ross, digital media pioneer (Digital Domain, Inc.) responsible for this film’s visual effects, and cameo appearance actor in the film!

I have reset the sensors to scan for frequencies outside the usual range. By emitting harmonic vibrations to shatter the lattices. We will monitor and adjust the frequency of the resonators. He has this ability of instantly interpreting and extrapolating any verbal communication he hears. It may be due to the envelope over the structure, causing hydrogen-carbon helix patterns throughout. I’m comparing the molecular integrity of that bubble against our phasers.

In this sci-fi classic, a spacecraft travels to the distant planet Altair IV to discover the fate of a group of scientists sent there decades earlier. When Commander John J. Adams (Leslie Nielsen) and his crew arrive, they discover only two people: Dr. Morbius (Walter Pidgeon) and his daughter, Altaira (Anne Francis), who was born on the remote planet. Soon, Adams begins to uncover the mystery of what happened on Altair IV, and why Morbius and Altaira are the sole survivors.  Shakespeare lovers will be pleased to know that this film is a take-off of Billy’s last play, The Tempest.

For an out of this world introduction by Jonah Nolan.