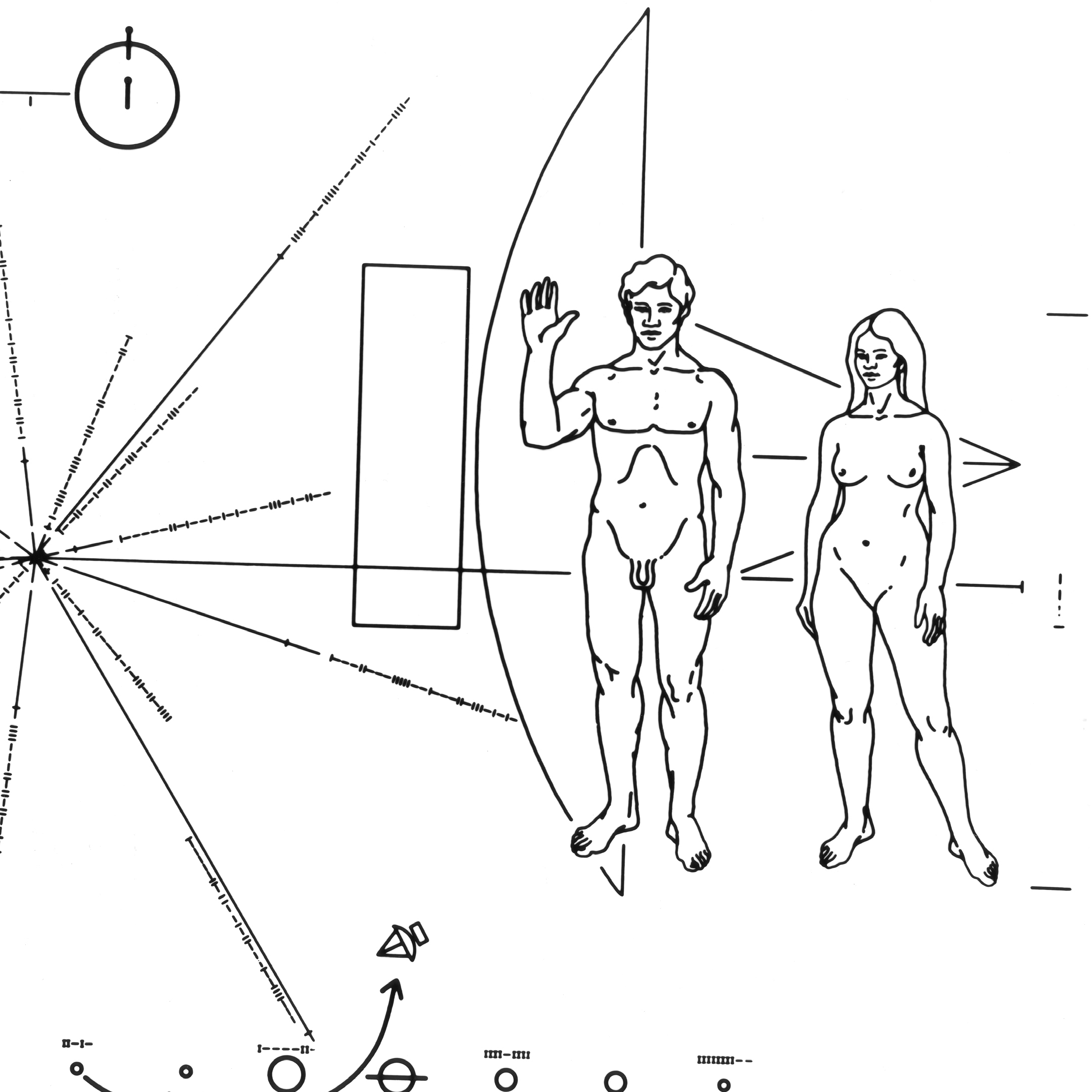 Started in 2016, 72 Hours of Science is an SFI tradition that challenges postdoctoral researchers to produce an interdisciplinary publication in three days. In November of 2019, 14 SFI postdocs withdrew to an isolated research location to accomplish, in just 72 hours, a monumental task — decoding the first complex communication from an alien civilization.* For this event, we sit down with some of the SFI postdocs to discuss their experience over that 72 hours, and what happens when speculation fuels research…a novel inversion of science fiction, which typically takes a scientific principle or innovation, and follows it to its logical conclusion. What happens when fiction comes first?

For the benefit of humanity, the aliens managed to divert their spacecraft for enough time to transmit a scientific treatise on a fundamental difference between their complex biology and ours. They were responding to images on the Golden Record, which launched aboard the Voyager spacecraft in 1977, engraved with a cosmic introduction to Earth and its inhabitants. Among the record’s 115 encoded images were multiple depictions of the two-parent system of reproductive biology.

“The aliens were totally shocked by these images, because in their world children are conceived and raised by three parents instead of two,” says Albert Kao, an Omidyar Fellow and Baird Scholar. “For scientists who study complex, living systems, it brings up all kinds of interesting questions about why three-parent systems would arise and what that might imply for the evolution of everything from molecular mechanisms to social institutions.”

With combined expertise in biology, evolution, information theory, mathematics, physics, philosophy, archaeology, cognitive science, and economics, the postdocs were uniquely qualified to receive and interpret the wide-ranging alien treatise. In three days and with little sleep, they documented biological consequences of tri-parental reproduction at multiple levels — the braid-like combining of the aliens’ chromosomes, the size differentiation between their gametes, the coordination of “mating events” among three sexes, and the cultural implications of their family structures.

According to the postdocs, the aliens’ three-parent system confers a distinct evolutionary advantage over a two-parent one. Just as sexual reproduction protects organisms from the harmful mutations that proliferate in asexual species, like dandelions, the three-parent reproductive system adds another layer of protection and genetic diversity, especially on planets bombarded with high radiation, which can cause a high mutation rate.

Exactly why the aliens’ three-parent system came to dominate, as opposed to a 4-, 5-, or n-parent system, might be explained by the coordination costs and social ramifications of searching for multiple mates at once. In their treatise, the authors describe the exponential difficulty of finding a “soul triplet”— a perfect romantic combination in a sea of possibilities.

Other social consequences of the three-parent system include a heightened risk of disease transmission and a societal trend towards a uniform culture. According to Omidyar Fellow David Kinney, such a uniform culture is needed to avoid the cognitive overload caused by trying to juggle the cultures and languages of three parents, nine grandparents, and potentially dozens of partial siblings.

“There are so many social angles to explore in this system,” says sociologist Tamara van der Does, a Program Postdoctoral Fellow. “The number of biological sexes would have ramifications across all aspects of an alien culture, from gender inequality to institutions like marriage and religion. After 72 hours, we were just starting to scratch the surface.”

Omidyar Fellow Tyler Marghetis says imagining a three-parent system “is actually a really great way to gain insight into the origins and implications of our more familiar two-parent system… in the same way that experiencing other cultures can help travelers better understand themselves.”

“There are a lot of interesting questions that can be pursued in this model,” says archaeologist Stefani Crabtree, an ASU-SFI Center Postdoctoral Fellow. “One of the great things about being a postdoc at SFI is that you have expertise in one area, but you also get exposure to other fields that connect to it.”

After 72 hours of intense transcription, the postdocs steeled themselves to record the final transmission in the treatise — the core innovations of alien culture, including “hyperdrive technology, the unified theory of physics, and the meaning of life.”

Unfortunately, this final portion of the transmission did not arrive intact.

*The alien transmission is a fictional premise. Any resemblance to actual species, civilizations, or planets is purely coincidental.