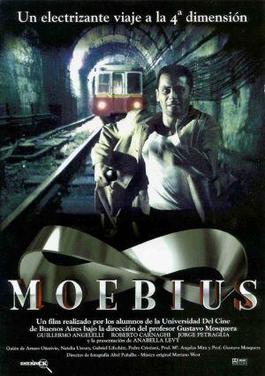 Specially introduced screening of Moebius, a 1996 Argentine science fiction film directed by Gustavo Mosquera and starring Guillermo Angelelli, Roberto Carnaghi and Annabella Levy. It is based on the classic short story A Subway Named Mobius, by Armin Joseph Deutsch. The film is set in a dark and dystopian Buenos Aires, where a 30-passenger convoy vanishes in the closed circuit of the underground system. Research will be initiated towards finding the cause of this dematerialization. A young topologist (surfaces mathematician) leads the investigation based on some lost maps and technical data sheets. He cannot find the whereabouts of the old scientist who designed the intricate weft of the subway web, until the unexpected aid from a young girl will ease the obtention of the first clues.